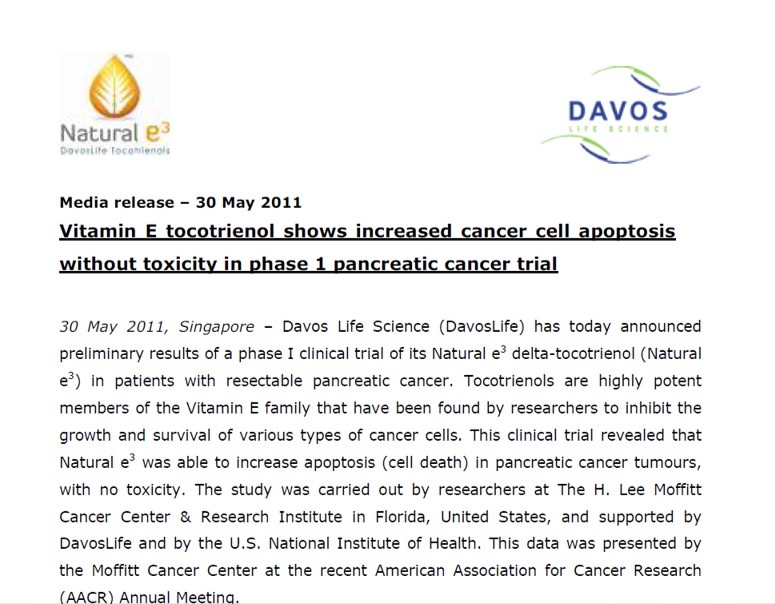 30 May 2011, Singapore – Davos Life Science (DavosLife) has today announced preliminary results of a phase I clinical trial of its Natural e3 delta-tocotrienol (Natural e3) in patients with resectable pancreatic cancer. Tocotrienols are highly potent members of the Vitamin E family that have been found by researchers to inhibit the growth and survival of various types of cancer cells. This clinical trial revealed that Natural e3 was able to increase apoptosis (cell death) in pancreatic cancer tumours, with no toxicity. The study was carried out by researchers at The H. Lee Moffitt Cancer Center & Research Institute in Florida, United States, and supported by DavosLife and by the U.S.  National Institute of Health. This data was presented by the Moffitt Cancer Center at the recent American Association for Cancer Research (AACR) Annual Meeting.

For a period of 2 weeks prior to surgery, 12 subjects received Natural e3, with 3 subjects at each dose level of 200 mg, 400 mg, 600 mg and 800 mg per day. This oral treatment occurred pre-surgery to examine the effect of Natural e3 on the resected pancreatic cancer tumour. To assess for toxicity, blood samples were collected pre-dose on day 1, day 8, on the day of the patients’ surgery and 3-6 weeks post-surgery. This trial occurred between October 2009 and August 2010.

The Moffitt Cancer Center researchers, led by Dr Mokenge Malafa, found no adverse drug-related events in the patients and no change in the rate of post-operative complications at doses up to 800 mg per day. They also found that giving patients daily doses of Natural e3 greater than 200 mg increased apoptosis in the pancreatic tumours as well as increased expression of p27, an important kinase inhibitor involved in the regulation of the cell cycle. Reduced levels of p27 have been found in some types of cancers.

“Pancreatic cancer is a highly fatal form of cancer with average 5 year survival rates at less than 10% from the time of discovery. We at The Moffitt Cancer Centre are researching into novel but safe compounds that could potentially help cancer patients. We are very pleased by the good biomarker activity and tolerability profile of Natural e3 found so far in our pancreatic cancer patients. We are moving ahead with the Phase I dose escalation trial with the next dose level of 1600mg per day already in progress,” said Dr Malafa, Head of Pancreatic Oncology, at The Moffitt Cancer Center. Two phase 1 trials of Natural e3 in healthy subjects have also been initiated at the Moffitt Cancer Center.

“We are pleased to be supporting Moffitt’s early Phase clinical trials of Natural e3 for cancer prevention and treatment. DavosLife is supplying all of the Natural e3 as well as part funding for the trials. Tocotrienols have been shown by various researchers to have good bio-activity in a range of human diseases. This is part of our efforts to advance the research into tocotrienols into new areas” said Mr Arthur Ling, CEO of DavosLife.

Natural e3, the brand name for DavosLife tocotrienols, is extracted from GMO-free palm fruits from its parent company’s plantations, using state-of-the-art technology to achieve the world’s highest purity of up to 97% purity. Natural e3 has achieved GRAS (Generally Regarded As Safe) status, which is a food safety standard reviewed and approved by the U.S. Food and Drug Administration (FDA).

DavosLife was established in 2004, as the world’s largest tocotrienol manufacturer and research company. We conduct as well as support cutting edge research into the use of natural tocotrienols to prevent or treat common diseases such as cancers, metabolic syndrome and heart disease, and for skin care applications. DavosLife tocotrienols are sold to leading international nutraceutical and cosmeceutical finished product manufacturers under the brand name, Natural e3. For its commitment in advancing tocotrienol research, DavosLife is a distinguished recipient of the 2010 Asia Pacific Frost & Sullivan Excellence Award in the Vitamin E Market. For more information on the benefits and applications of Natural e3, please visit www.davoslife.com

Located in Tampa, Florida, Moffitt Cancer Center is an NCI Comprehensive Cancer Center – a designation that recognizes Moffitt’s excellence in research and contributions to clinical trials, prevention and cancer control. Moffitt currently has 15 affiliates in Florida, one in Georgia and two in Puerto Rico. Additionally, Moffitt is a member of the National Comprehensive Cancer Network, a prestigious alliance of the country’s leading cancer centers, and is listed in U.S. News & World Report as one of “America’s Best Hospitals” for cancer. Moffitt’s sole mission is to contribute to the prevention and cure of cancer.